You are here: Home / About

Since 2010, the Cabinet has collaborated with emerging artists, local communities, youth groups, volunteer groups and arts festivals to create expanded cinema events, living graphic novels and participatory live cinema projects. The heritage of local places, people and their creative endeavours is of particular interest for the Cabinet: the work of fine artists, poets, writers and what makes local landscapes and locations special.

The Cabinet have been exploring the world of avant-garde cinema since their inception in 2010, both on celluloid (Jan Svankmajer, Jodorowsky, Maya Deren, Brothers Quay, Man Ray) and in art and literature (Franz Kafka, Paul Nash, Ithell Colquhoun).

Their music has been played on BBC 3 Late Junction, Cerys on 6 and for BBC Radio 4 programmes. Film scores include Breakdown or Breakthrough (Rose, 2012), Boys with Broken Ears (Shayeghi, 2013) and Oxi: An Act of Resistance (McMullen, 2014).

The Cabinet in rehearsal 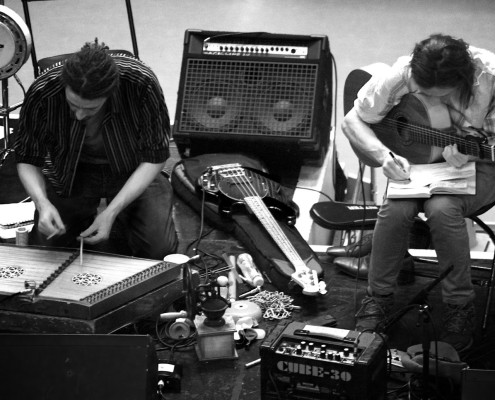 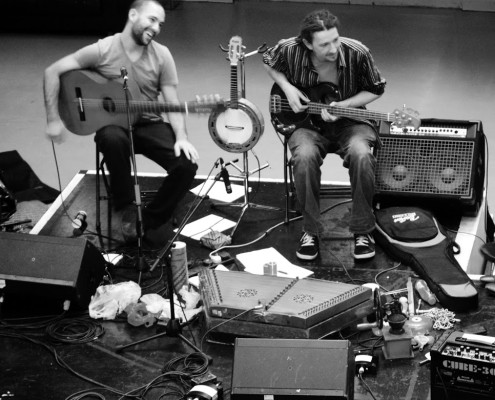 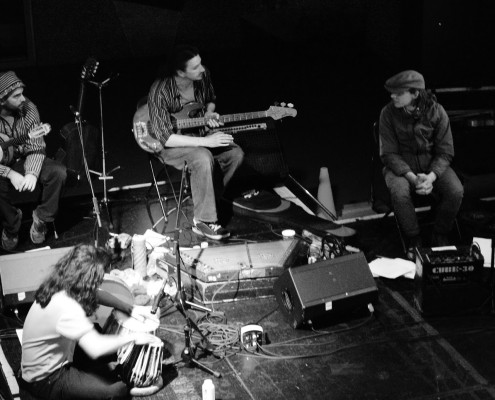 Kieron Chissik (founder): guitar, viola, foley
Kieron Chissik is a composer, producer and founder of The Cabinet of Living Cinema. He composes for theatre and film using viola, guitar and loop-pedals to build up layers of melody, “soundscapes” and live sound-effects. A range of world, folk and electronic music inflects his style as well as a belief in keeping music live, the accidental and semi-improvised being integral elements of his working practice.

Gareth has been instrumental in creating the Cabinet’s new cinema sound for scores such as Caligari, Nosferatu and Man with a Movie Camera, bringing his folk and jazz background to scores and creating wistful harp melodies and ethereal vibes. He is also co-creator of Mr & Mrs Brilliant, meditative sound wave practitioners. Check them out!

Robert Parkinson: dulcimer, bass, foley
Robert Parkinson brings the haunting sound of the dulcimer to the Cabinet and is the group’s live Foley or special effects coordinator. He has co-written scores to Strike, The Colour of Pomegranates, Santa Sangre, and plays an integral part in the music and “found object” Foley of all Cabinet Voyages to date. Rob is also author of T4 Pad.

Francesca Ter-Berg: cello
Cellist, composer and producer, Francesca Ter-Berg is an explorer of musical genres, from Klezmer to Indian classical music, Arabic Maqam to Jazz. Francesca has worked with the Cabinet since its inception and has co-written scores to Maya Deren’s At Land, The Colour of Pomegranates, Strike and has added soaring, hauting cello to Cabinet scores throughout the two years of Making Tracks.

Joe Perry: percussion
Joe Perry brings a distinctive style to the Cabinet, part kit-drummer with African and Brazilian percussion and rhythms alongside cajon and electric drill augmenting the foley. He was an integral part of the writing team for Santa Sangre and Cabinet Voyages including Frankenstein and the Cyborg and Things to Come.

Fiona Fey: clarinet, vocals
Fiona has worked on writing and recording scores for both of the Cabinet’s graphic novel ballads to date: Theatre of the Wandering West and The Kingdom of Paul Nash, bringing wistful vocal harmonies and clarinet lines to the ensemble.